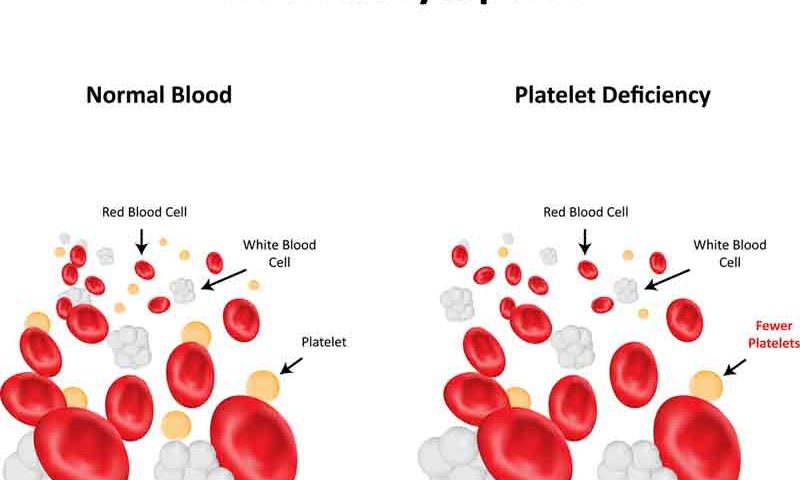 Many owners are unsure of what a low platelet count entails when it comes to their cat’s health. Thrombocytopenia is a condition in which the cat has depleted levels of blood platelets (less than 40,000 platelets per microliter).

Causes and Symptoms of Feline Thrombocytopenia

Common diseases that lead to feline thrombocytopenia include leukemia, extreme blood loss due to trauma or hemorrhage and lymphoma.

Symptoms of a cat affected by thrombocytopenia can be difficult for an owner to known. Some symptoms include excessive or unusual bruising of the skin, known as ecchymoses; nose bleeds and blood in the stool (hematochezia) or blood in the urine (hematuria). There may also be small, barely noticeable red spots (sclera) on the whites of the eyes or on the skin or gums inside the mouth. Additional symptoms of feline thrombocytopenia include fever, heart murmur, excessive coughing, nasal mucus, lethargy and in severe cases, the cat may collapse.

Like many conditions, diseases and infections affecting cats, diagnosing thrombocytopenia can require a variety of tests to rule out other potential health issues. This includes a complete medical history and physical examination in which the overseeing veterinarian will look into what medications, vaccinations and treatments the affected cat has undergone. There will also be additional diagnostic tests such as blood tests, serum biochemistry tests, x-rays and ultrasounds to check for abnormalities within the body, a urinalysis and tests to determine the functioning level of the immune system.

Once all other potential diseases have been ruled out and the cause of thrombocytopenia has been confirmed, treatment can begin. Treatment will vary from cat to cat, based on the underlying cause. For example, cats who have developed thrombocytopenia due to an immune-related disorder, then corticosteroids are used to help prevent the immune system from destroying the blood platelets.

Additional treatments include antibiotics for infectious diseases and blood transfusions to replace or increase platelet levels.